Wow. I can’t believe that it’s been a month since we welcomed our second sweet girl into the world. She has truly completed our family and filled our hearts with so much joy; we are beyond blessed. So, since she’s a month old now, I figured it was time to share details of my pregnancy and her birth story. 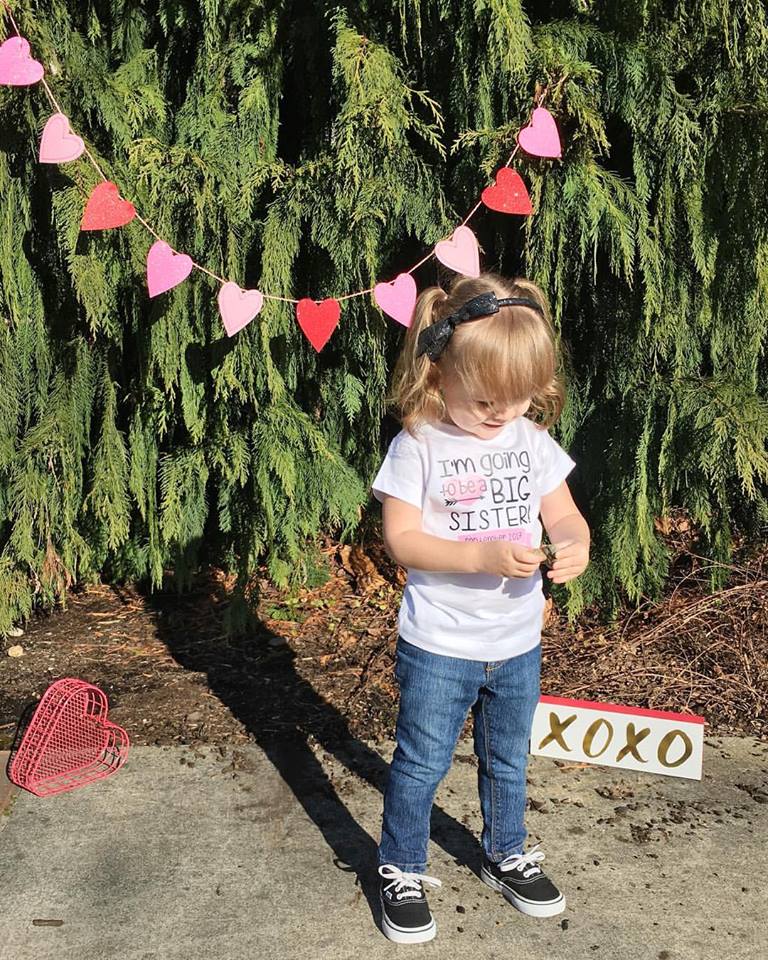 The decision to have another baby wasn’t something sudden. I had been thinking about a second child since Elsie was around a year old. But, I knew that having two kids under two would be a challenge, so Matthew and I agreed that we would start trying after Elsie turned 2. In September of 2016, he left to go to training for a month. The plan was that we would start trying when he got back, so in late October, our journey to pregnancy began. It took us a few months to get pregnant, but in January of 2017 I got a positive test and we were ecstatic! We called family and friends to share the great news (much more low key than how we announced my first pregnancy, but isn’t that the common theme with second children?) and shortly afterward, we announced on social media. Everyone was thrilled! 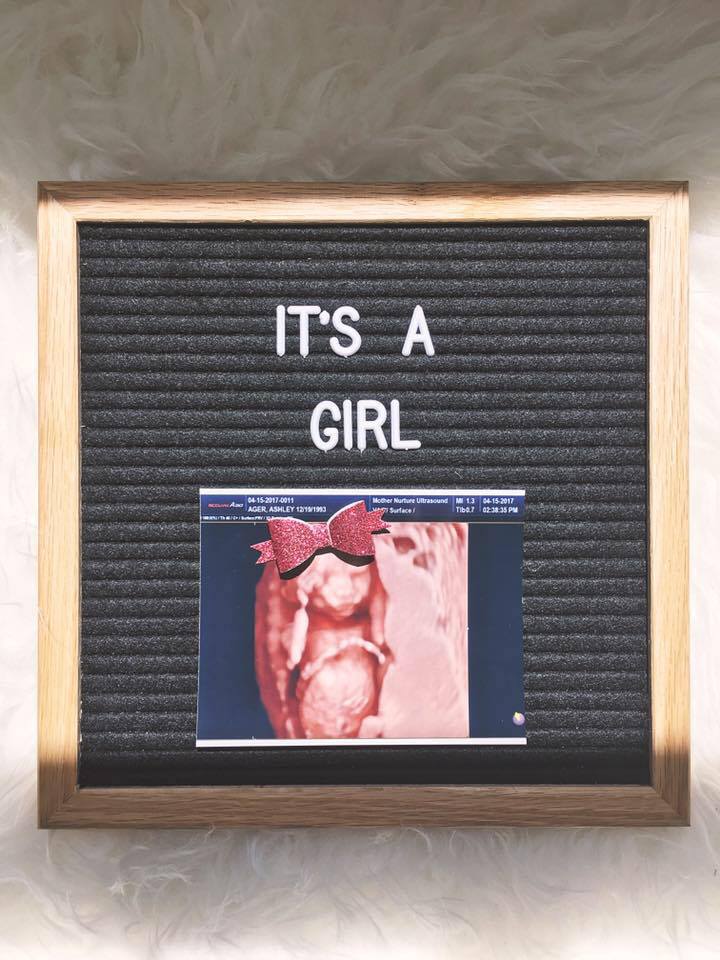 The first few weeks of my pregnancy were a breeze. I was certain that it would be as easy as my pregnancy with Elsie was. But at around 5 weeks, morning sickness began and it was brutal. I spent more time getting sick than I did doing anything else. It was also extremely hard to care for Elsie during that time because I was stuck in the bathroom all day long. It felt like I would be sick for the rest of my life. Thankfully at around 18 weeks, my nausea subsided and I could finally enjoy my pregnancy again. After that, the weeks began to fly by. Caring for a toddler kept me so busy that I honestly forgot I was pregnant half the time. Before we knew it, it was time to find out the gender. Naturally, everyone was team boy, including us. We felt that a boy would be the perfect addition to complete our family, but deep down I just knew the baby was a girl. We made an appointment to find out the gender and sure enough, the ultrasound tech said “it’s a girl”! I could tell by the look on Matthew’s face that he was a bit disappointed, but I knew he would adore our second little girl just as he did our first. I was thrilled to be having another girl and immediately starting imagining all of the matching outfits and girl’s days ahead of me. Plus, I had always seen myself as a girl mom, so my heart was content.

At around 20 weeks, I had my official anatomy scan done. Everything was perfect with the baby, but they told me that I had a marginal placenta. Of course, I had no idea what that meant, so I initially panicked. They explained that my placenta was lying near the opening of my cervix and that if it didn’t move over the course of my pregnancy, that it could cause issues during delivery. All I could do was sit back and see what happened. I began getting more regular ultrasounds to track the placement of my placenta and thankfully it ended up moving. From there, the rest of my pregnancy was amazing. I had little to no issues or pains, and I think it’s because Elsie kept me so active. Before I knew it, it was time to have maternity photos done and start packing our hospital bags! It felt like I had blinked and my pregnancy was almost over. In a way, I was sad because I knew this would most likely be my last pregnancy, but I was also so eager to meet her that I was wishing the weeks away! 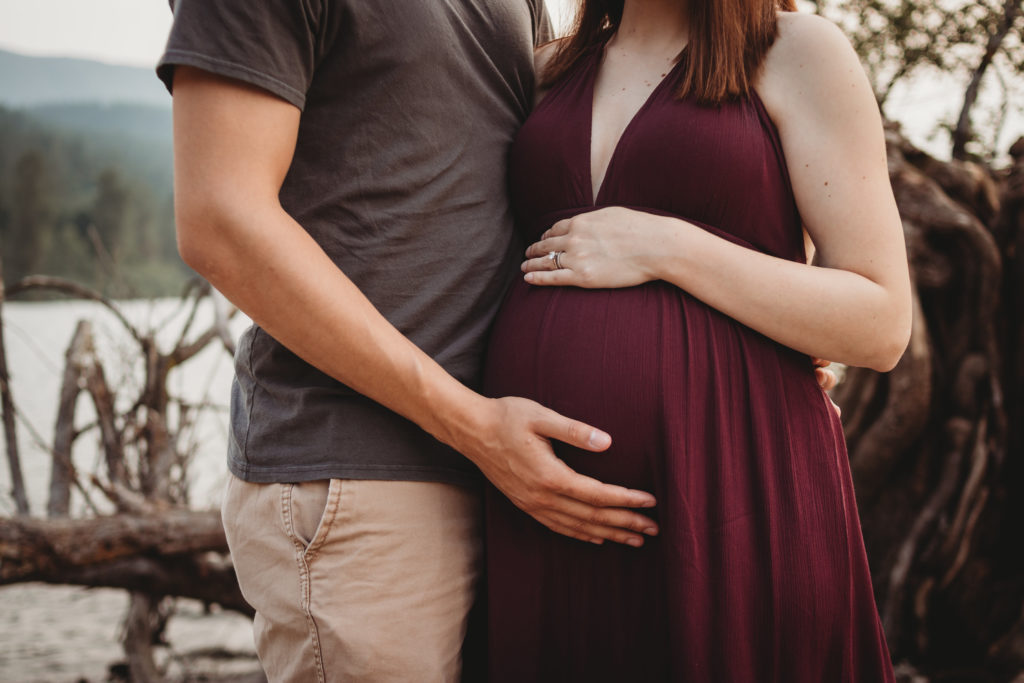 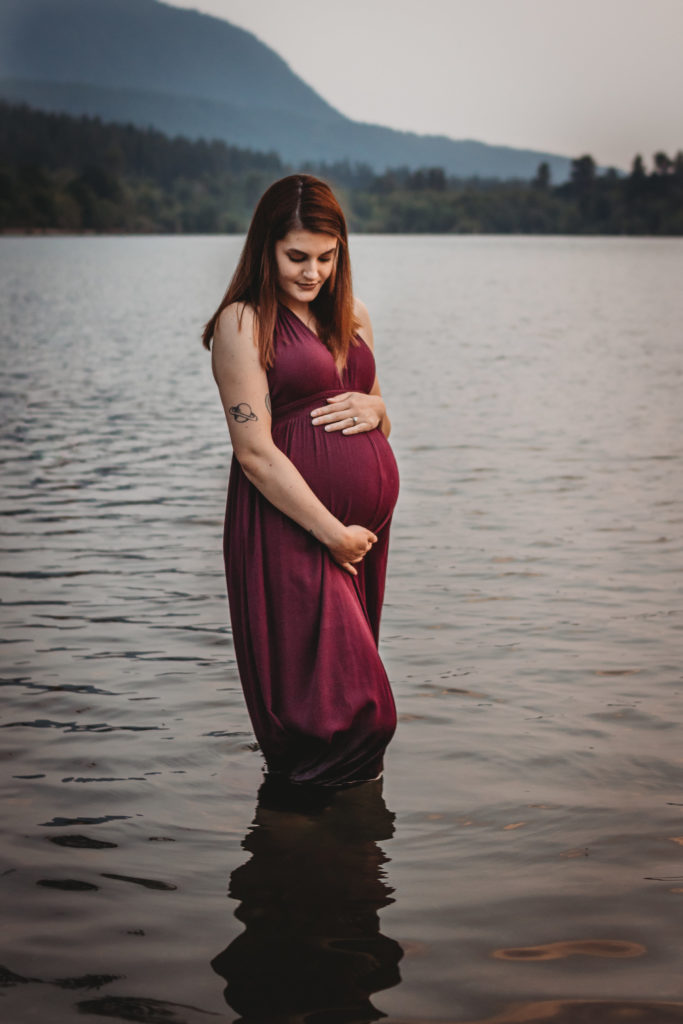 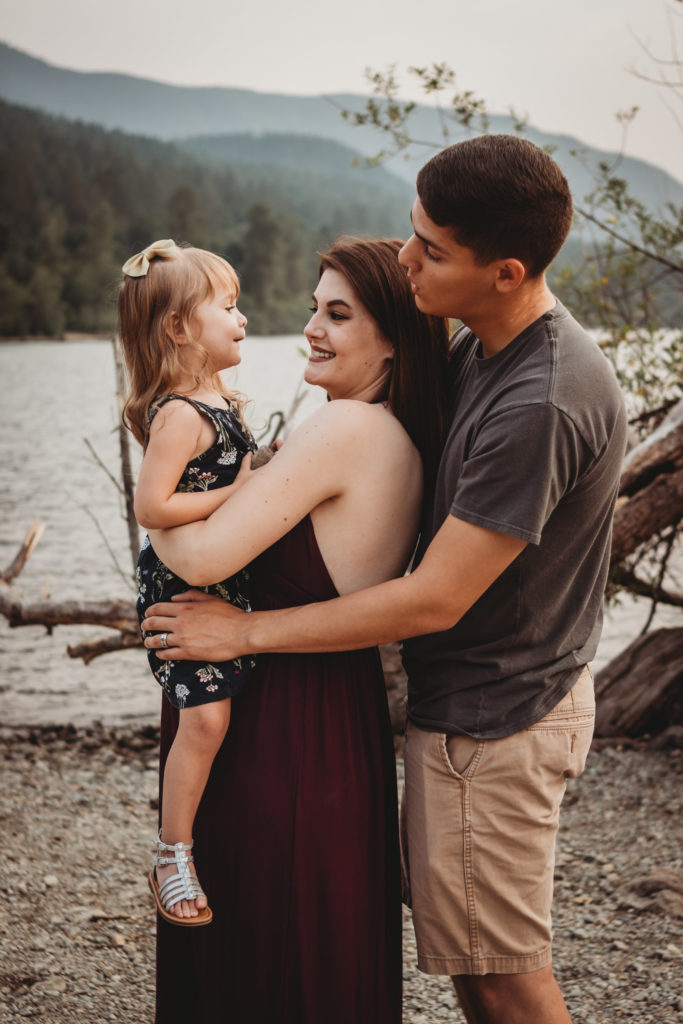 During the last few weeks of my pregnancy, I was doing everything I could to get labor to start. I walked, drank raspberry leaf tea, bounced on a yoga ball; nothing seemed to work. It started to feel like I would be pregnant forever. At my 39 week appointment, my doctor did a membrane sweep and told me she didn’t want to see me next week (meaning, she hoped I’d have my baby before then!). I was feeling pretty discouraged and told her “I’m sure you will. This baby doesn’t want to come out!” Little did I know that I would be holding our daughter less than 24 hours later. 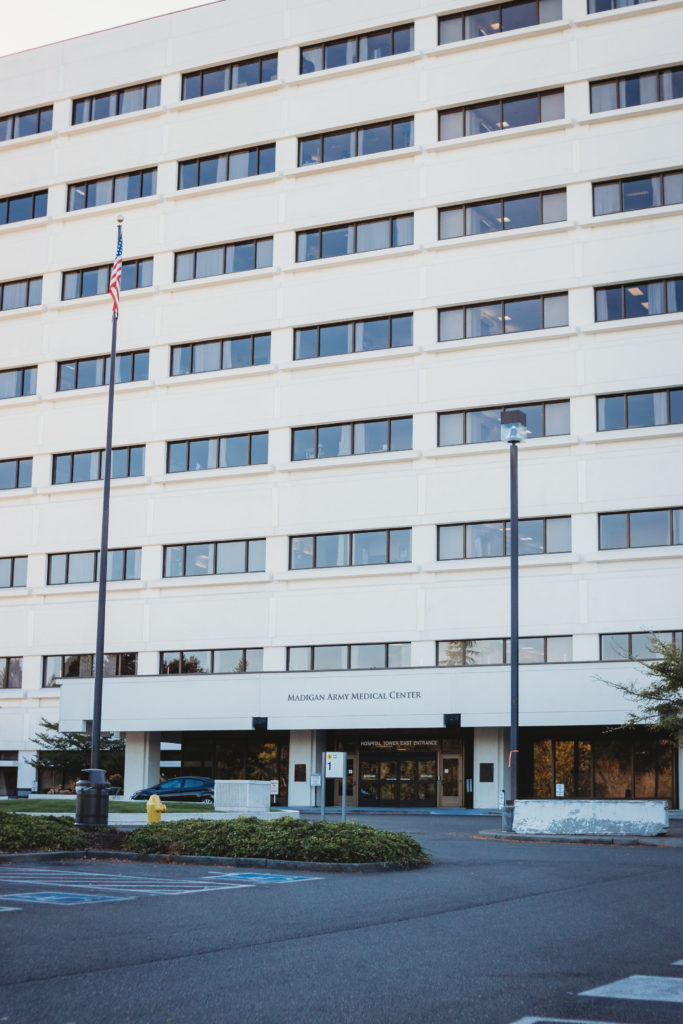 On the morning of September 19th, 2017, I woke up cramping. I tried my best to get comfortable and go back to sleep, because I knew Elsie would be waking up soon, but it just wasn’t possible. When Matthew got home, he noticed that I was in pain and asked me if it was time. I told him “maybe” and decided to jump in the shower just in case. He left to go back to work and told me to call if I needed him. By the time I got out of the shower, the pain had increased and I knew it was go time. I started doing my makeup (yeah, I know…..don’t judge me) and Matthew headed back to our house.  The contractions were coming on quickly and each one was more powerful. Eventually, I gave up on my makeup and decided we needed to go, so at around 10 am, we jumped in the car and raced to the hospital.

It was about 10:15 am when we got up to the labor and delivery triage. They took me back to a room and began the process of admitting me. I asked them to check for dilation, so they did, and I was already at 7 cm. They began speeding things along because they knew I was in pain and that I wanted an epidural. As we waited, I began feeling lots of pressure. I just knew something was happening. Matthew ran out to find the doctor so I could be checked again and as soon as she told me I was already 10 cm dilated, my water broke. That’s when the panic set in because I knew that I would be having the baby naturally.

After my water broke, so did all hell. Doctors began rushing in and out and then they sped me down the hallway toward labor and delivery. As soon as I got into the room, I started pushing. The pain was like nothing I had ever experienced in my entire life. My body felt like it was being twisted into a million different directions. I was that crazy woman in movies who is screaming bloody murder and having to be held down to deliver her baby. All the while, poor Elsie was sitting at the foot of the bed with a front row seat to all of the action. We hadn’t had time to call our friends to come get her, so she was there for the entire thing. Luckily, a few wonderful nurses kept her mostly shielded from the chaos. It felt like I only pushed for a split second and then, it was over.

Miss Isla Anneston Kate came out screaming, ready to let the world know she had arrived. I couldn’t believe it; I had just delivered a baby naturally and I felt like superwoman. Almost immediately after Isla was born, she was whisked away because she wasn’t breathing properly (mostly due to how quickly labor and delivery had happened). The doctors monitored her in the room for awhile, but eventually she had to go to the NICU. I wanted so badly to go with her, but I couldn’t, so Matthew tagged along. She spent a total of 6 hours in the NICU and when she finally got released, Matthew went to pick Elsie up. Seeing my girls meet for the first time was something I will never forget. Elsie was in love with baby sister and my heart was so full. It was such an emotional day, but I would relive it a million times if I could. 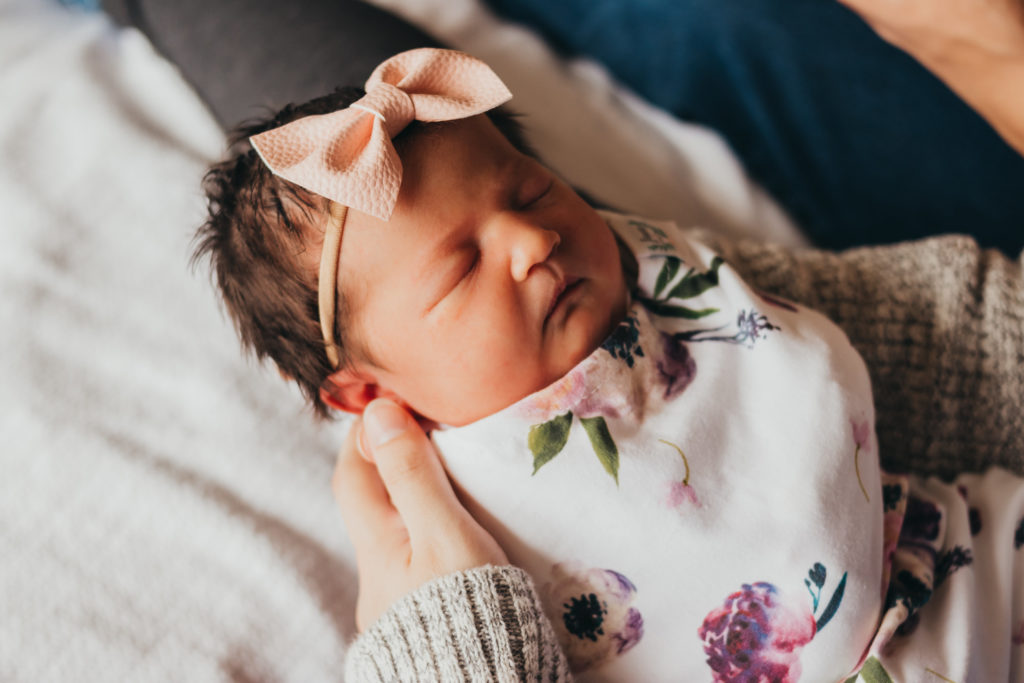 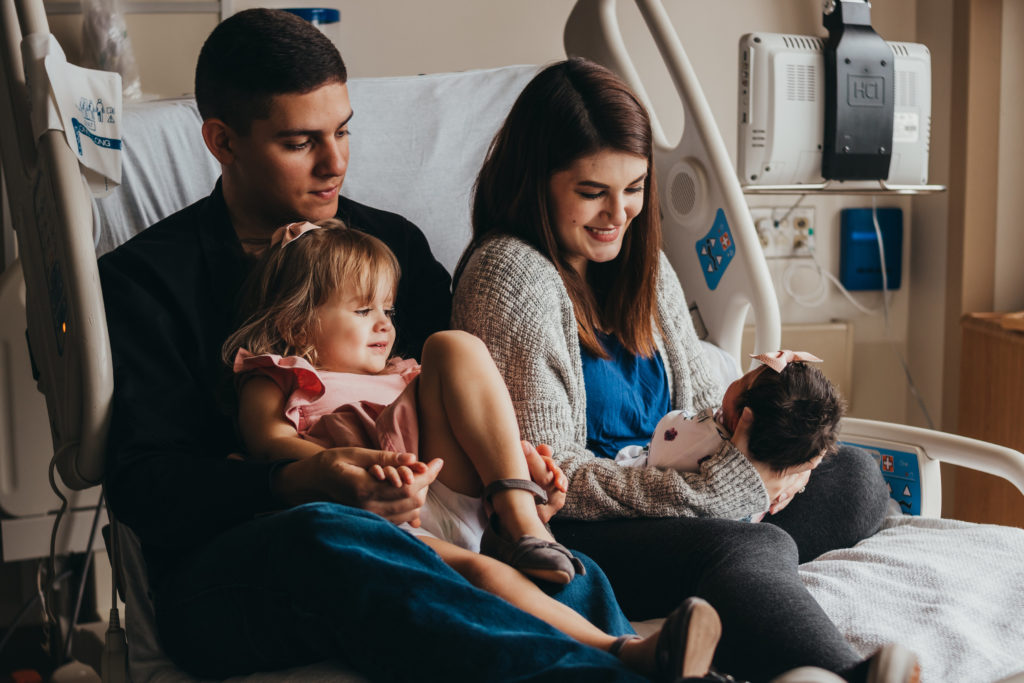