Wow. I cannot believe it’s been almost 4 years since I was pregnant with our first daughter, Elsie. And soon, we will be welcoming our second daughter into the world. So, I figured I would share my pregnancy story and maternity photos from my pregnancy with Elsie with you all as a fun “throwback” blog post! 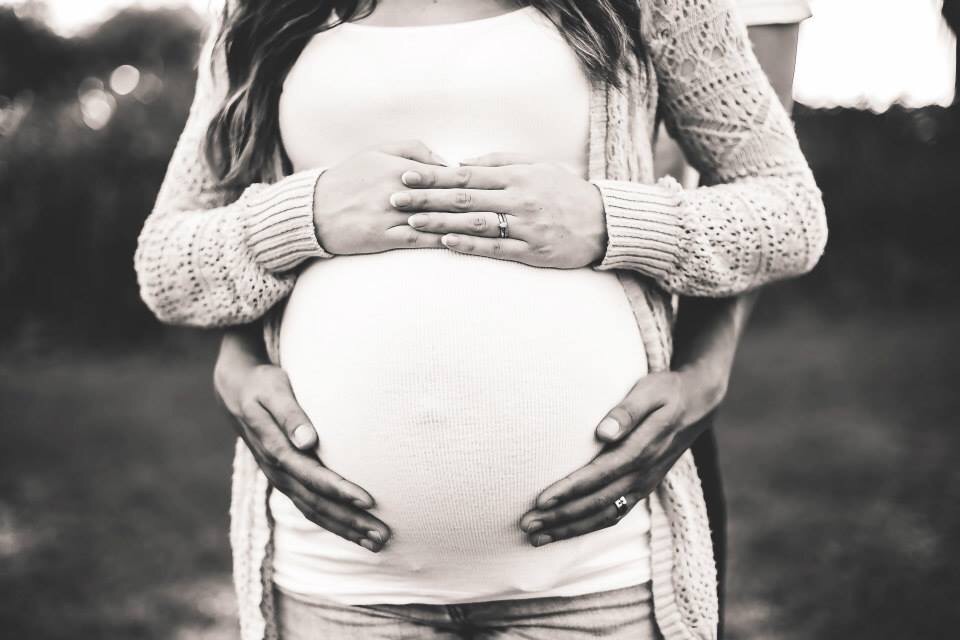 Before we had even gotten engaged, we had talked about kids. It was something we both wanted, but we wanted it to be planned. We decided that we would be extra careful the first year of our marriage, then once we had been married for a year, we would decide if we were ready or not. January 2014 marked our one year anniversary and I was more than ready to start thinking about bringing a baby into our lives. My husband…..not so much. He was still a little nervous about the idea; after all, we were still young and he wasn’t sure if we could handle it just yet. I dropped the subject and decided I would wait until HE brought it up again. Not even 2 months later, in March, he told me he was ready to start trying. We were both under the impression that it would take awhile to get pregnant, so we were expecting anything to happen. Boy, were we wrong. On April 7th, 2014, I realized my period was late. I took a test and sure enough, it was positive. We had no idea what to think, but we were thankful that we were blessed with a baby so quickly. 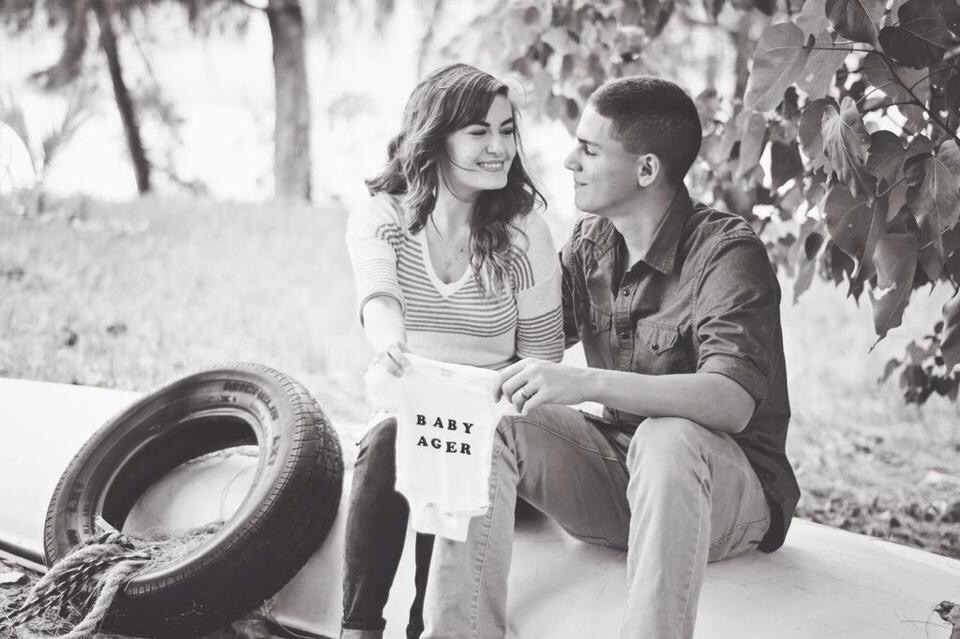 The first few weeks after finding out I was pregnant were a breeze. I was ecstatic and we couldn’t wait to share the great news. Our families were a bit heartbroken because the odds of them being there for the birth were slim to none but, nevertheless, everyone was thrilled and we were, too! At around 7 weeks, morning sickness hit. I got sick after eating chili one night (and guys, tossing up chili is the WORST, just FYI). For the next 5 weeks I felt awful, but I powered through. Thankfully, at around 12 weeks, I got my appetite back, and the first thing I wanted was a loaded baked potato….risky, huh?! Aside from the typical morning sickness, pregnancy was wonderful! I was looking forward to the rest of my pregnancy! 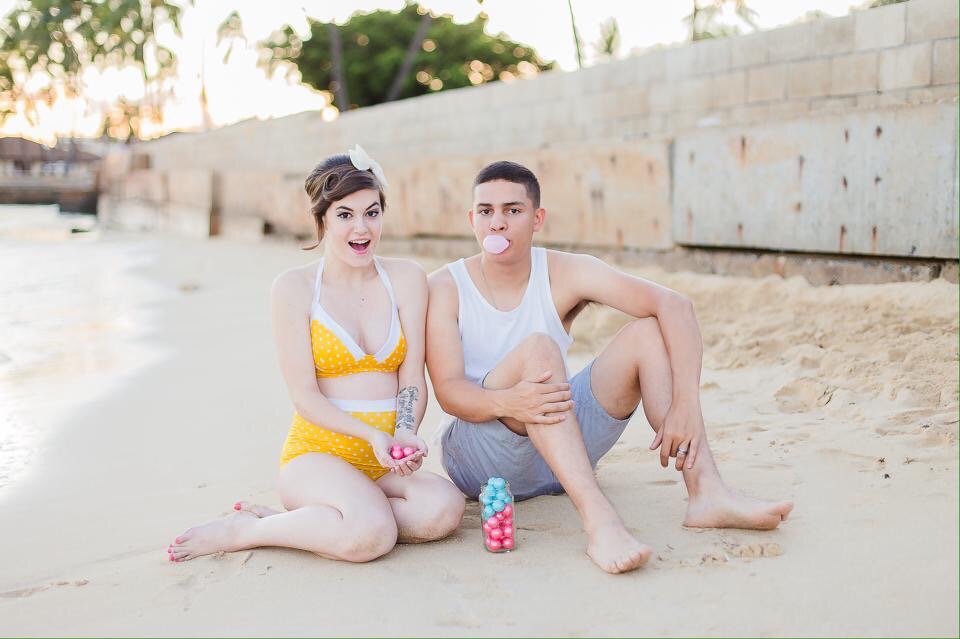 The weeks kept going by quickly and everything was going smoothly. I loved being pregnant and was constantly daydreaming of our sweet baby. I was so eager to find out the gender, so we got an early gender determination ultrasound done. We had convinced ourselves that we were having a boy, but at 17 weeks, we got the news that we were having a GIRL! As much as I had wanted a boy first, my heart was bursting out of my chest at the thought of having a daughter. I began buying all things pink and sparkly immediately after we found out. The first time I felt her kick was the most amazing experience. I remember feeling an overwhelming amount of love and pure happiness every time she fluttered. The rest of the second trimester went by without any issues. I couldn’t believe that we would be meeting our sweet baby girl in just a few months. 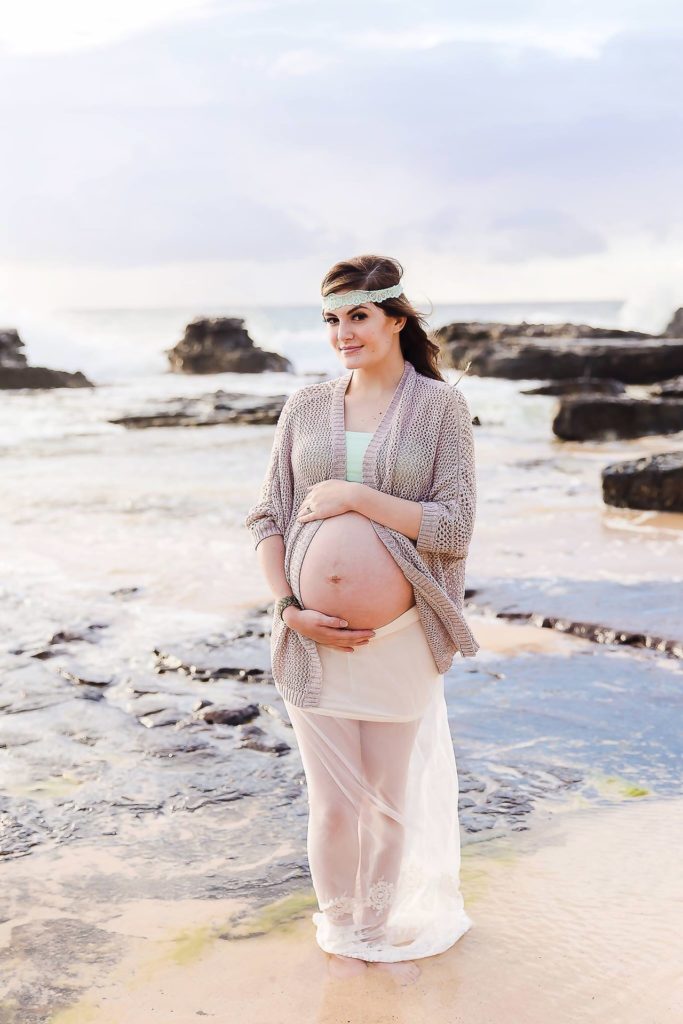 My entire pregnancy had been wonderful. I enjoyed every second of being pregnant; even all the aches and pains. We had been blessed with a perfectly healthy baby and I’d had such an easy pregnancy so far. I was confident that it would be smooth sailing for the duration of my pregnancy. And then, when I was 36 weeks, my doctor told me that our baby was still breech. He gave me two options: have an elective c-section or have an ECV procedure done (more about that, here). I thought long and hard about my options. The idea of a c-section scared me to death, but the ECV had risks involved and there was a chance that the baby could turn back to breech afterward. In the end, I chose to have the ECV done, because despite the possible risks, it gave me a chance at having a vaginal delivery.

When I was 37 weeks, I went in to have the procedure done. The ECV had to be performed in an operating room, just in case there was the need for an emergency c-section. I was terrified. Two doctors began the process of turning our daughter from the outside. The pain was excruciating; I begged for them to stop. At one point, our baby’s heart rate dropped dangerously low. The entire room of people began to scramble and I just knew this was it; I was having a c-section right then. My husband and I held each other and began to cry. Suddenly, the doctors screamed out “WAIT!”. The room grew silent and we heard the sound of a heartbeat; a strong and fast heartbeat. Somehow, our daughter’s pulse had gone back up and it was safe to keep trying to turn her. The doctors asked if I wanted to try again. As much as I wanted to say no, I agreed to try one last time. Miraculously, it only took one more push from the doctors to get her to turn. They checked on the ultrasound machine and she was finally head down. Once we were released to go home, I was determined to get her out before she could turn back breech. After just one week, I was back at the hospital in active labor. On November 24th, 2014, I gave birth to our sweet Elsie Madelyn Belle, vaginally and without any complications.

My first pregnancy was such a wonderful experience. And having my daughter was the beginning of an amazing journey: motherhood. It’s hard to believe that my second pregnancy is almost over and I’ll soon be a mama of TWO. I am truly blessed! Thank you for taking a walk down memory lane with me. Stay tuned for the story on my second pregnancy!